The Villa Adriana (at Tivoli, near Rome) is an exceptional complex of classical buildings created in the 2nd century A.D. by the Roman emperor Hadrian. It combines the best elements of the architectural heritage of Egypt, Greece and Rome in the form of an 'ideal city'. 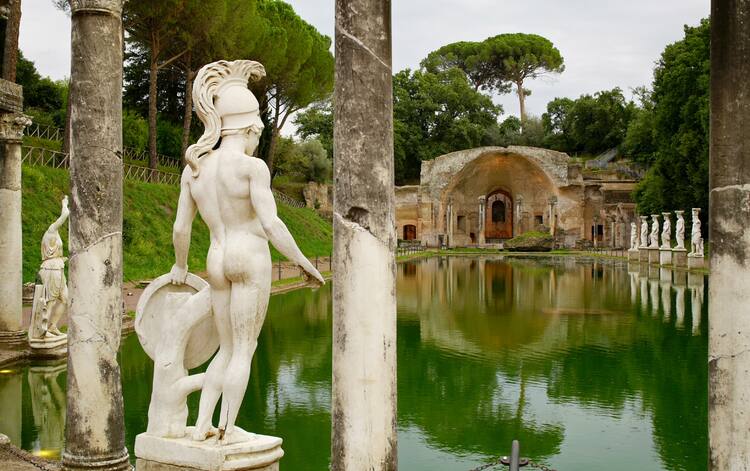 Villa Adriana is an exceptional architectural legacy of the great Roman Emperor Hadrian. Built as a retreat from Rome between 117 and 138 AD, the villa was designed as an ideal city and incorporates the architectural traditions of Ancient Greece, Rome and Egypt. The remains of some 30 buildings extend over 120 hectares of the Tiburtine Hills, in Tivoli in the Lazio Region.

While the structures appear to be arranged with no particular plan, the site comprises a complex and well planned arrangement together with a large number of residential and recreative buildings, extensive gardens and reflective pools, the site creates a serene and contemplative oasis.

There are some thirty extant buildings within the site that can be broadly divided into four groups.

A first group of buildings on the site includes the so called ‘Greek Theatre’ and ‘Temple of Cnidian Aphrodite’.

At the core of the Villa, is a second group of structures including buildings specifically for the emperor and his court, and includes the so called ‘Maritime Theatre’, the ‘Imperial Palace’, ‘Winter Palace’, Latin and Greek ‘Libraries’ and the ‘Golden Square’. This group of structures is organized around four separate peristyles. The ‘Golden Square’ is one of the most impressive buildings in the complex, comprising a vast peristyle surrounded by a two-aisled portico with alternate columns of cipollino marble and Egyptian granite. The ‘palace’ consists of a complex of rooms around a courtyard. The circular structure of the ‘Maritime Theatre’ comprises an ionic marble peristyle that surrounds an artificial circular island with a miniature villa. The ‘Libraries’ are reached from there by two passages, and a nymphaeum stands on the northern side.

A third group of buildings comprises the baths, including Small Thermae, Large Thermae and the Thermae with Heliocaminus.

The final group of structures includes the ‘Lily Pond’, ‘Roccabruna Tower’ and ‘Academy’. In addition to these structures, there is a complex of underground elements, including cryptoportici and underground galleries, used for internal communications and storage. There are also a number of large gardens, including the ‘Pecile’, and monumental nymphaea, as that with the ‘Temple of Cnidian Aphrodite’ or that in the ‘Court of the Libraries’ and, of course, dwellings for servants, as the ‘Cento Camerelle’.

This extraordinary complex of buildings and structures is symbolic of a power that was gradually becoming absolute. Villa Adriana, reminiscent of famous places and buildings throughout the empire, reproduced elements of the material cultures of Egypt, Greece and Rome in the form of an “ideal city”.

After suffering damage and neglect for many centuries after Hadrian’s death in 138 AD, the site was eventually rediscovered in 1461. The serenity of the site inspired a renewed interest in classical architecture. Studies of Villa Adriana influenced architects of later centuries, notably the Renaissance but especially baroque architecture. Its remarkable achievement in design continued to exert significant influence on notable architects and designers of the modern era.

Criterion (i): The Villa Adriana is a masterpiece that uniquely brings together the highest expressions of the material cultures of the ancient Mediterranean world.

Criterion (ii): Study of the monuments that make up Villa Adriana played a crucial role in the rediscovery of the elements of classical architecture by the architects of the Renaissance and the Baroque periods. It also profoundly influenced many 19th and 20th century architects and designers.

Criterion (iii): Villa Adriana is an exceptional survival from the Early Roman Empire. The great number of buildings and other structures within it, and the collection of statues and sculptures that decorate the interior and exterior rooms, illustrate the taste and erudition of one of the greatest Roman Emperors. Hadrian was a man of immense culture, who personally oversaw the construction of the villa, inspired by his travels through his extensive Empire, he brought the best of the varied cultures back to this palatial complex.

The archaeological area of Villa Adriana protected as a World Heritage property includes all the essential elements that contribute to the recognition of the site as holding Outstanding Universal Value. The key features of the site in the protected area include exemplary and unusual structures situated within an extensive area of green space, comprised of gardens and pools, fountains and architectural settings that create an immersive landscape that has remained unchanged since at least the 18th century. The original layout of the main buildings is perfectly preserved, in its relationship with the surrounding landscape. Despite centuries of plundering and destruction, prior to the 15th century, the integrity of the structures is well preserved, to the extent that it is possible to accurately interpret various component parts of the structures comprising the monumental complex.

Potential impacts to the buffer zone were identified in close proximity to the World Heritage property boundary. The buffer zone is an important and sensitive site that ensures the enhancement, the presentation and protection of the Outstanding Universal Value of the property, and as such requires sensitive management and protection.

As far back as the latter half of the 19th century, restoration work carried out at Villa Adriana was undertaken in keeping with the theories and techniques of archaeological restoration, the criteria of which had recently been applied in the restoration of the Colosseum and later codified in the Restoration Charter. At the same time careful analysis and studies made possible to carry out partial anastylosis of some structures.

All numerous, subsequent interventions by the Archaeological Office of the Ministry for Cultural Heritage and Activities and Tourism were effected in compliance with the principles of the Restoration Charter, thus ensuring their preservation to date.

Since the site is an archaeological park, much of the area is an open, green space that demands careful maintenance. For this reason, a Green-space Management Plan is drawn up every three years, aimed at safeguarding historic tree species, maintaining visitor walkways and weed clearance – all of which are useful in terms of preserving the historic masonry work. Work is underway to reinstate the Villa’s ancient gardens to their original state at the time of Hadrian. The buffer zone provides important protection to the site and requires special maintenance for the conservation of the Outstanding Universal Value of the property.

Since 1997 a management plan has been in force relating to infrastructural aspects of the site – drainage, water and electricity supply and distribution, hygienic services, emergency exits, etc. A wireless video surveillance system was installed, covering the most sensitive sections within the Archaeological Area.

The Ministry has allocated special financial resources to the site in order to draw up the Management Plan of the whole site.

The monument is one of the most visited sites in Italy. Since 1996 major sources of funding from the European Union, the National Lottery and elsewhere have permitted the preparation and implementation of a major programme of investigation, restoration and conservation, and, in particular, the upgrading of visitor facilities. Activities to enhance interpretation and access to the site include a number of cultural events and exhibitions aimed at raising awareness of the various aspects of the monumental complex at Villa Adriana, and the creation of a Villa Adriana website. An analysis of the site’s accessibility for the physically disabled is currently underway. In addition there will be a program of archaeological research conducted in collaboration with international partners (Italian and foreign universities and institutions). There will be a specific study of the underground passageways. One of the main goals is to integrate, in a more effective manner, the property with the surrounding area, the ancient Tiburtine countryside, which preserves numerous historic-archaeological remains, covering a wide range of periods, Villa Gregoriana Park and the World Heritage property, Villa d’Este which is under the protection of the Italian Ministry of Cultural Heritage and Activities and Tourism, and now also managed by the same competent office as Villa Adriana.

Province of Rome, Region of Latium