Historic Jeddah is situated on the eastern shore of the Red Sea. From the 7th century AD it was established as a major port for Indian Ocean trade routes, channelling goods to Mecca. It was also the gateway for Muslim pilgrims to Mecca who arrived by sea. These twin roles saw the city develop into a thriving multicultural centre, characterized by a distinctive architectural tradition, including tower houses built in the late 19th century by the city’s mercantile elites, and combining Red Sea coastal coral building traditions with influences and crafts from along the trade routes. 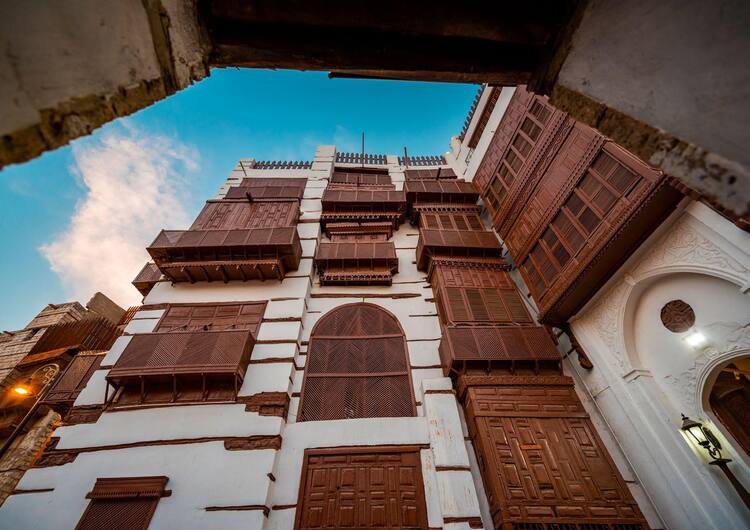 Historic Jeddah is an outstanding reflection of the Red sea architectural tradition, a construction style once common to cities on both coasts of the Red sea, of which only scant vestiges are preserved outside the kingdom of Saudi Arabia and the nominated property. The style is characterized by the imposing tower houses decorated by large wooden Roshan built in the late 19th century by the city`s mercantile elites, and also by lower coral stone houses, mosques, ribat-s, suqs and small public squares that together compose a vibrant space.

Historic Jeddah had a symbolic role as a gate to Makkah for Muslim pilgrims reaching Arabia by boat since the 7th century AH when the 3rd Caliph Othman ibn Affan made it the official port of Makkah. This strict association with the Muslim annual pilgrimage (Hajj) gave Historic Jeddah a cosmopolitan population where Muslims from Asia, Africa and the Middle East resided and worked, contributing to the city`s growth and prosperity.

Historic Jeddah reflects the final flourishing of the Indian Ocean sea trade after the opening of the Suez Canal in 1869 and the introduction of steamboats that linked Europe with India and Asia. This brought enormous wealth to many merchants who built lavishly decorated houses, and it also led to developments of suqs and mosques. In addition, the increase in sea going vessels allowed many more pilgrims to make the pilgrimage to Makkah, resulting in an expansion in the provision of accommodation for these visitors.

Criterion (ii): The cityscape of Historic Jeddah is the result of an important exchange of human values, technical Know-how, building materials and techniques across the Red Sea region and along the Indian Ocean routes between the 16th and the early 20th centuries. Historic Jeddah represents this cultural world that thrived, thanks to international sea trade; possessed a shared geographical, cultural and religious background; and built settlements with specific and innovative technical and aesthetic solutions to cope with the extreme climatic conditions of the region (humidity and heat).

Jeddah was, for centuries, the most important, largest and richest among these settlements and today, Historic Jeddah is the last surviving urban site along the Red Sea coast that still preserves the ensemble of the attributes of this culture: commercial-based economy, multi-cultural environment, isolated outward-oriented houses, coral masonry construction, precious woodwork decorating the facades, and specific technical devices to aid internal ventilation.

Criterion (iv): Historic Jeddah is an outstanding reflection of its final flourishing as a trading and pilgrimage city and, the only surviving urban ensemble of the Red Sea cultural world.

Jeddah’s Roshan tower houses are an outstanding example of a typology of buildings unique within the Arab and Moslem world. Their specific aesthetic and functional patterns - absence of courtyard, decorated Roshan façades, ground floor room used for offices and commerce, rooms rented for pilgrims - reflect their adaptation to both the hot and humid climate of the Red Sea and to the specificity of Jeddah, the Gate to the Holy City of Makkah for the pilgrims arriving by sea, and an important international commercial pole. The development of the Roshan tower houses in the second half of 19th century illustrates the evolution of the patterns of trade and pilgrimages in the Arabian Peninsula and in Asia following the opening of the Suez Canal in 1869 and the development of steamboat navigation routes linking Europe with India and East Asia. The extraordinary relevance of Jeddah’s tower houses is further increased by the fact that they are not only unique within the Red Sea culture region, an architectural typology born in Jeddah that spread to the nearby Hejaz cities of Al-Madinah, Makkah and Taif from where it has since completely disappeared under the pressure of modern development.

The overall landscape of Jeddah is characterised not only by the aesthetically remarkable tower houses, but also by the dense accumulations of lower houses, the ensembles of structures that related to trade, religion and the accommodation of pilgrims, and for the overall urban form and its division into clearly defined quarters.

Criterion (vi): Historic Jeddah is directly associated, both at the symbolic intangible level and at the architectural and urban level with the Hajj, the yearly Muslim pilgrimage to the Holy City of Makkah. Jeddah was the landing harbour for all the pilgrims that reached Arabia by sea, and for centuries, up to the present, the city lived in function of the pilgrimages.The goods the pilgrimage brought with them from Asia and Africa and sold in the city, the religious debates with Ulama(s) from Java and India, the spices, the food, and the intangible heritage of the city were all related to the pilgrimage that has immensely contributed to defining the identity of Jeddah. The association with Hajj is also very evident in the urban structure of the nominated property and is found in the traditional souks running East –West from the sea to Makkah Gate, the Ribat(s) and the Wakala(s) that used   to host the pilgrims; in the architecture, notably in the facades and internal structure of the houses; and in the very social fabric of the city, where Muslims from all over the world mingled, lived, and worked together. The ensemble of these elements, tangible and intangible, demonstrates the intimate and long-lasting connection between the pilgrimage and the nominated property and is an example of the very rich cultural diversity resulting from this religious event unique in the whole Islamic World.

The nominated property covers about one-third of the original walled-in city and contains an ensemble of the attributes that convey its Outstanding Universal Value, such as the main examples of Jeddah`s Roshan tower houses, outward-oriented houses, coral masonry construction, precious woodwork decorating the facades and specific technical devices for internal ventilation, as well as lower houses, the ensembles of structures that related to trade, religion and the accommodation of pilgrims, and for the overall urban form and its division into clearly defined quarters. Furthermore, Historic Jeddah, the Gate to Makkah is an urban environment boasting a strong trade-based economy intimately associated, both at the symbolic intangible level and at the architectural and urban level, with the Hajj, and a multi-cultural social framework where Muslims from all over the world live and work together. Its complete representation of the features and processes conveying its significance.

Notwithstanding the inevitable decay of the historic structures and the overall evolution of its urban surroundings, the nominated property still possesses all the necessary attributes complying with the concept of "intactness", including the commercial processes, the social relationships and the dynamic functions essential to define its distinctive character. As many of the attributes are highly vulnerable to decay and lack of conservation, there needs to be a precise delineation of what survives in terms of buildings and urban plan, as a basis for integrity, and also for future protection and conservation, and a clear understanding of the threshold beyond which integrity would no longer be intact if further buildings were lost.

Historic Jeddah, the Gate to Makkah is a living urban environment primarily hosting residential and commercial activities, with mosques and charitable structures. The nominated property represents an authentic and traditional urban environment where the headquarters of century old economic enterprises, retail shops, traditional souks, small cafes, popular restaurants, and street food vendors are still concentrated. A surprisingly rich human environment where Yemeni, Sudanese, Somali, Pakistani and Indian migrant workers purchase and market their products to Saudi and non- Saudi clients in crowded traditional souks. Far from a frozen and dead tourist attraction, the nominated property is an authentic sector of the city that still fully conveys the image of what this Red Sea commercial and pilgrimage city used to be. Its historic houses have not been substantially altered by modern additions and in-depth transformations, and the high "Roshan tower houses" are mostly well preserved. Historic mosques have preserved their function and role for the community and most of their original features. Buildings have only been subject to minor maintenance that has rarely reached the original masonries and their embedded wooden beams, preserving the overall authenticity of the site. Nevertheless the city is a shadow of the thriving, prosperous place it used to be and an understanding of its former importance will only fully emerge once its many buildings are nursed back to life.

The Saudi Council of Ministers has passed the New Antiquities, Museums and Urban Heritage Law by the Royal Decree Number (M/3) dated November 2nd 2014 providing the legal basis for the protection of Historic Jeddah.

The daily management of the nominated property is the responsibility of the local branches of the Municipality of Jeddah and SCTA, located in the heart of the old city. Their staff is in charge of supervising maintenance, cleaning, protection and presentation of the site. A parallel, traditional system, depending from the Ministry of Interior, is responsible of the social welfare of the population and of the security arrangement in the area in coordination with Police and Civil Defence. This traditional mechanism, based on the charismatic figure of the Umdah(s), permits to reach the ensemble of the population and to involve merchants, and owners’ associations in the management of the property.

A Management Plan is being developed.

The preservation of the Outstanding Universal Value of the site is guaranteed by the new Urban Regulation approved by the Jeddah municipality in 2011 that sets precise and strict obligations for the property and its buffer zone.

The key long-term requirement and most relevant priorities for the protection and management of the property include the reduction of the rate of decay of the historic houses, which are often abandoned and squatted by poor immigrants and the control of the speculative moves that jeopardize the ensemble of the historic city. The new Urban Regulation defines standard and official rules that can be verified and implemented on site. The involvement of merchants and owners, and punctual restoration and revitalization projects are expected to set a new virtuous circle to tackle the most significant threats to the property reducing its vulnerability to negative development that could affect its authenticity and integrity.

The general strategy for the preservation and revitalization of the area is being drawn by the Saudi Commission for Tourism and Antiquities (SCTA) in coordination with the Jeddah Municipality and the participation of the civil society.

A detailed Conservation Strategy is being developed to set out how the massive, long-term conservation project to turn round the fortunes of the property, through stabilising and conserving the historic buildings and generating new uses, will be initiated, resourced and approved. It should also be underpinned by detailed surveys and analysis of the properties.