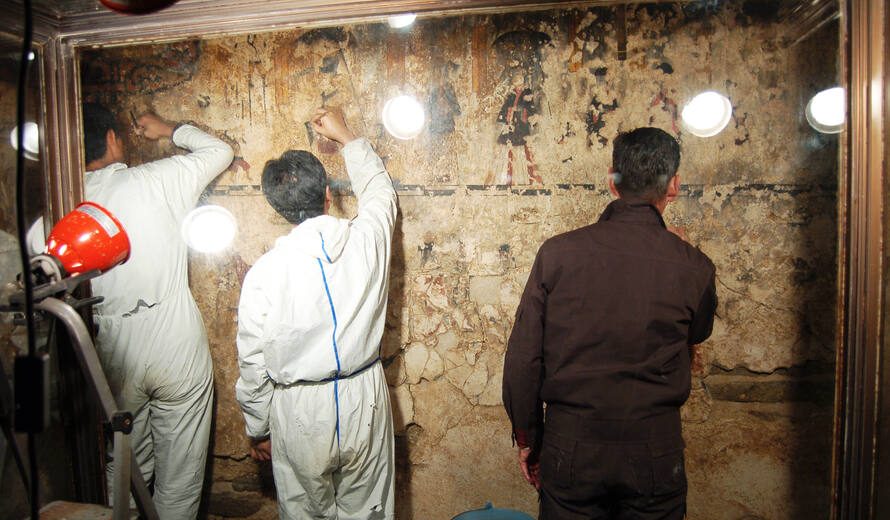 Conservation on the west wall of the mural paintings in the Susan-ri Tomb. / UNESCO/DPRK national conservation team

The UNESCO World Heritage Centre will organize a photographic exhibition “The Preservation of the World Heritage Site of the Koguryo Tombs and Mural Paintings of the Democratic People’s Republic of Korea, 2001-2012” from 12 to 26 October 2012 at Salle des Pas Perdus, UNESCO Headquarters, in Paris.

Over the last decade, the UNESCO/Republic of Korea Funds-in-Trust, started in 2001, introduced international standard of conservation for cultural heritage and considerably reinforced the national capacity in the field of conservation in the Democratic People’s Republic of Korea.   In addition, since 2008 the Project began a full scale conservation work of the Susan-ri Tomb which mural paintings are counted as one of the most important and finest mural paintings for that era in the Northeast Asia. UNESCO experts together with the national expert of the DPRK have made painstaking efforts to safeguard this wonderful mural painting.

The photo exhibition testimonies to these decade-long efforts of UNESCO made in close co-operation with the authorities of the DPRK, by illustrating various moments of execution of the Project.

The Tombs and Mural Paintings of the Koguryo Kingdom, which flourished from the 1st BCE until 7th CE, are now the common heritage of the Korean people. They also represent an outstanding form of artistic expression for which the Complex of Koguryo tombs was inscribed on the World Heritage List in 2004.

In this project, UNESCO, by highlighting the role of shared cultural heritage, has been playing an important part in promoting dialogue and reconciliation in the Region. As such, the Project for Preservation of Koguryo Tombs and Mural Paintings features among the flagship projects of UNESCO in the field of safeguarding world cultural heritage.

The inauguration of this exhibition presided over by the Director-General of UNESCO takes place on 11 October 2012 at 17:30. It will be open to the public from 12 October 2012.

The Exhibition is made possible thanks to the Cultural Heritage Administration of the Republic of Korea through the UNESCO Funds-in-Trust Project for Preservation of the Koguryo Tombs and Mural Paintings in the DPRK.