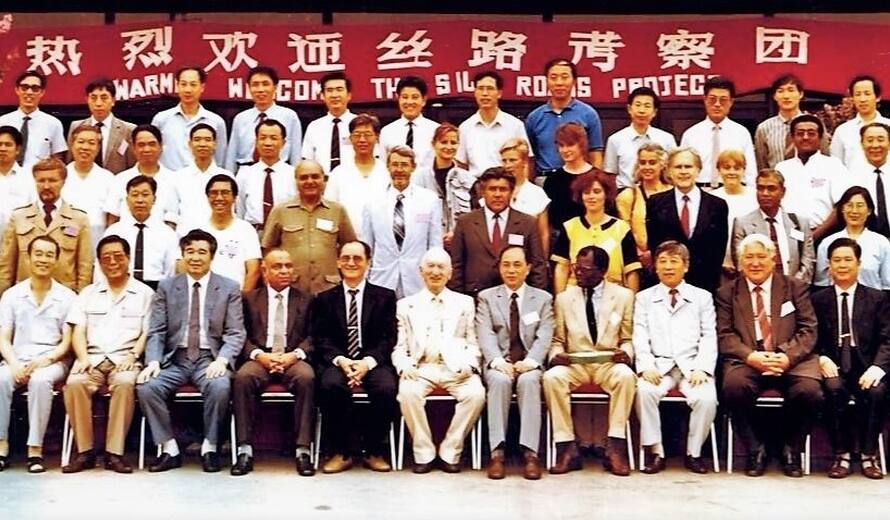 Group photo of the Desert Route Expedition of the Silk Roads from Xi’an to Kashgar (20/07/1990) © Peking University, China / LIN Meicun

During an online meeting on 20 July 2020, the Chinese authorities and UNESCO invited national and international experts to celebrate the 30th anniversary of the UNESCO Silk Roads Project and the Launch Ceremony of the Digital Archive of the Silk Roads Project (DAS).

On 20 July 1990, UNESCO launched the Desert Route Expedition of the Silk Road in Xi'an, China, the first in a series of five expeditions that formed the “Integral Study of the Silk Roads: Roads of Dialogue”, organized in the framework of the World Decade for Cultural Development (1988–1997). As a result of this initial study, and for now more than 17 years, the UNESCO World Heritage Centre has supported international cooperation efforts towards the serial transnational World Heritage nomination of the Silk Roads, resulting in one inscription on the World Heritage List, the “Silk Roads: Routes Network of Chang'an-Tianshan Corridor” (China, Kazakhstan and Kyrgyzstan), and a number of ongoing identification, conservation and nomination projects along the Silk Roads. The aim of all these activities has been to facilitate the global recognition of the crucial role and relevance of the Silk Roads—not only as tangible heritage but also as routes that allowed a variety of artistic, philosophical, religious and economic exchanges.

This anniversary event was organized by the China National Silk Museum, the Quanzhou Maritime Museum and the Chinese National Commission for UNESCO, in coordination with the World Heritage Centre, and was opened by Mechtild Rössler, Director of the World Heritage Centre. She stressed that cultural heritage along the Silk Roads can be a shared foundation and a starting point for future international cooperation. The event involved the participation of several Chinese national experts from Tsinghua University, Peking University, Nanjing University, the Chinese Academy of Social Sciences and the Chinese Academy of Cultural Heritage, along with international experts such as Doudou Diène, former Director of the Division of Intercultural Dialogue and Coordinator of the UNESCO Silk Roads Project.

To make the research and information collected about the Silk Roads in the last 30 years available to all those interested, Feng Jing, Chief of the Asia and the Pacific Unit of the World Heritage Centre and Coordinator of the Serial Transnational World Heritage nomination project, announced the launch of the Digital Archive of the Silk Roads project (DAS), to be based at the International Institute for Intercultural Dialogue on the Silk Roads (IIDOS) of the China National Silk Museum (Hangzhou, China), which will also complement the UNESCO Silk Road Online Platform, managed by the UNESCO Social Sciences Sector.