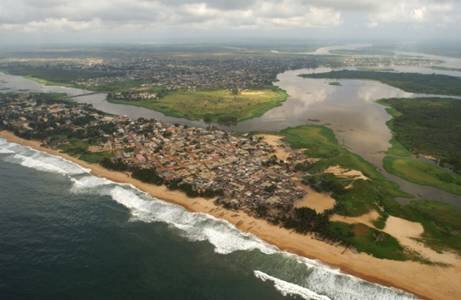 Grand-Bassam is the first capital of the former French colony of Côte d’Ivoire, from 1893 to 1900. The historic city, or “France quarter” as it was called, was built on a stretch of land between the Ouladine Lake to the north and the Atlantic Ocean to the south. The historic city has changed little since the colonial period having kept, in large part, the same configuration of its buildings although many have deteriorated over time and from inappropriate restoration techniques. The France-UNESCO Cooperation Agreement and the World Heritage Centre provided preparatory assistance to Côte d’Ivoire to elaborate a nomination proposal of the Historic Town of Grand Bassam on the World Heritage List, and develop the necessary complementary information during the nomination process. After the inscription, the France-UNESCO Cooperation Agreement provided support for the management and preservation of the historic city, as well as technical expertise.

In late 2007 a French expert from AEPAUMED (the European association for architectural and urban heritage in Mediterranean), along with two architects from the AEPAUMED team, carried out two missions in Grand Bassam in cooperation with the Ministry of Culture and Francophone Côte d’Ivoire, the national commission of Côte d’Ivoire to UNESCO, and the city council of Grand Bassam. These missions enabled a first identification of urban heritage and an opportunity to define a working method with all institutional partners in Côte d’Ivoire. In order to evaluate the urban heritage according to specific architectural criteria (exceptional, remarkable or ordinary buildings) and to propose a heritage conservation plan the mission carried out data collection and field surveys which included descriptions of urban form, the architectural typology of each zone, sketching of architectural elevations of characteristic buildings, as well as photographic documentation and mapping of elements such as the streets (avenues, streets, plantations).


In January 2008 the nomination was submitted to the World Heritage Centre. Following the submission, the World Heritage Centre, in the framework of the France-UNESCO Cooperation Agreement, requested the AEPAUMED team continue work so as to provide the necessary complimentary information, and, especially, the implementation of conservation actions in the Historic Town of Grand Bassam: management mechanisms in the proposed zones for inscription and in the buffer zone, a management plan, capacity building. Complimentary information was submitted in 2009 by the Ivorian authorities.

The nomination was referred at the 33rd Session of the World Heritage Committee (Sevilla, 2009) at the recommendation of ICOMOS who advised adjustment of the property’s perimeters to include the vernacular area (the original dossier focused solely on the colonial quarter), and in particular on N’zima, situated on the border of the lake. This African fishing village is a significant witness to the history of the city’s occupation.

An action plan to finalise the nomination was established in Coordination with the directorate of heritage and services of the city during the workshop in Grand Bassam in October 2011 (under the framework of the Cultural heritage and local development project). The technical support of the France-UNESCO Cooperation Agreement had 3 goals: an analysis of the urban form and architecture of N’Zima quarter (in order to adjust the site’s description to the newly defined larger boundaries), and the reformulation of the criteria and of the comparative analysis. The France-UNESCO Cooperation Agreement team also provided technical assistance to the directorate of heritage in the Côte d’Ivoire to finalise the nomination. The Historic Town of Grand Bassam was inscribed on the World Heritage List in 2012 during the 36th Session of the World Heritage Committee (Saint Petersburg, 2012).

Following the inscription, the France-UNESCO Cooperation Agreement was also requested to provide technical support to the Heritage House, established by the Ministry of Culture of Côte d’Ivoire, to monitor, control and manage the site after 2012. A French State conservation architect (Architecte des Bâtiments de France) was identified by the French Ministry for Culture and carried out a technical assistance mission in 2013, on monitoring questions, control mechanism, management and development of the site. Following this mission, the Ivorian authorities developed a complement to the action plan. The France-UNESCO Cooperation Agreement subsequently provided assistance for the Heritage House and implemented a remote monitoring mechanism, and long term guidance and support.

Furthermore, the Minister of Culture of Côte d’Ivoire and the Municipality of Grand Bassam decided to initiate the restoration of an iconic building, the former courthouse of Grand Bassam was chosen for its historical and symbolic value. A restoration project was launched with co-financing from the State. The France-UNESCO Cooperation Agreement was requested to provide project design and management support for the following: aid in planning; elaboration of specifications; supervision during the restoration; as well as the development of a pilot-project for restoration training. The aim is to train craftsmen and architects and to develop an African branch of heritage restoration.


In 2014, a mission of a French conservation architect (Architecte en Chef des Monuments Historiques) enabled to specify the priority steps of the restoration of the building and to propose a road map associating restauration and training on site. The mission also revealed innovative and little known construction process, based on artificial “stone”, which advanced the knowledge about the construction methods and use of cement in the early 20th century worldwide.