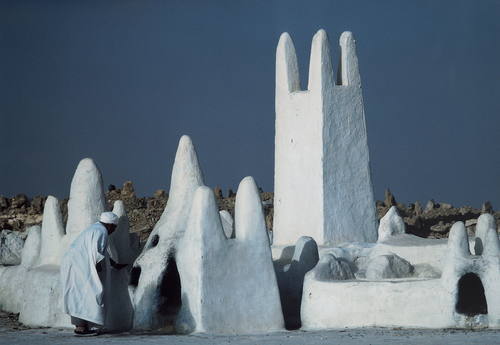 This project’s objective was to provide technical assistance to set up management and conservation plans on several sites distributed across a vast territory.

600 km south of Algiers, Algeria, the small M'Zab Valley is home to a unique collection of sites inscribed on the World Heritage List in 1982. Very old traces of dwellings are seen on the plateaus and rocky escarpments bordering this valley which were hit by the uncommon and devastating Oued floods. The site was regularly occupied as far back as the early part of the 11th century. Since then, the people inhabiting this site developed a unique architecture based on strict religious, social and moral ideals and adapted to the semi-desert conditions. The five ksour are built on rocky spurs and house a sedentary urban population. Each ksour is dominated by a mosque designed like a fortress. In the 1990s, pressure from spontaneous urbanization led to the degradation of the natural environment, and the transformation of traditional urban fabric threatened the ksour. In September 2001, at Algeria’s request, the World Heritage Centre dispatched an expert specializing in the restoration of built heritage. In 2003, a safeguarding and development project was proposed under the France-UNESCO Cooperation Agreement as part of the thematic project: “Historic Cities”.

The experts established a boundary for the safeguarded area which was adopted by decree in 2005. An action programme was implemented to rehabilitate the traditional hydraulic system. It also recommended the development of a safeguarding and preservation plan which was initiated by the Algerian government in 2007. Steps towards cooperation between the City of Arles (France) and the City of Ghardaïa (Algeria), were taken in the year 2004 between representatives of the Algerian authorities, the French Ministry of Culture, the City of Arles, the World Heritage Centre and the DELTA programme - Euromed Heritage II (the DELTA programme focused on integrated regional planning of heritage conservation and management).