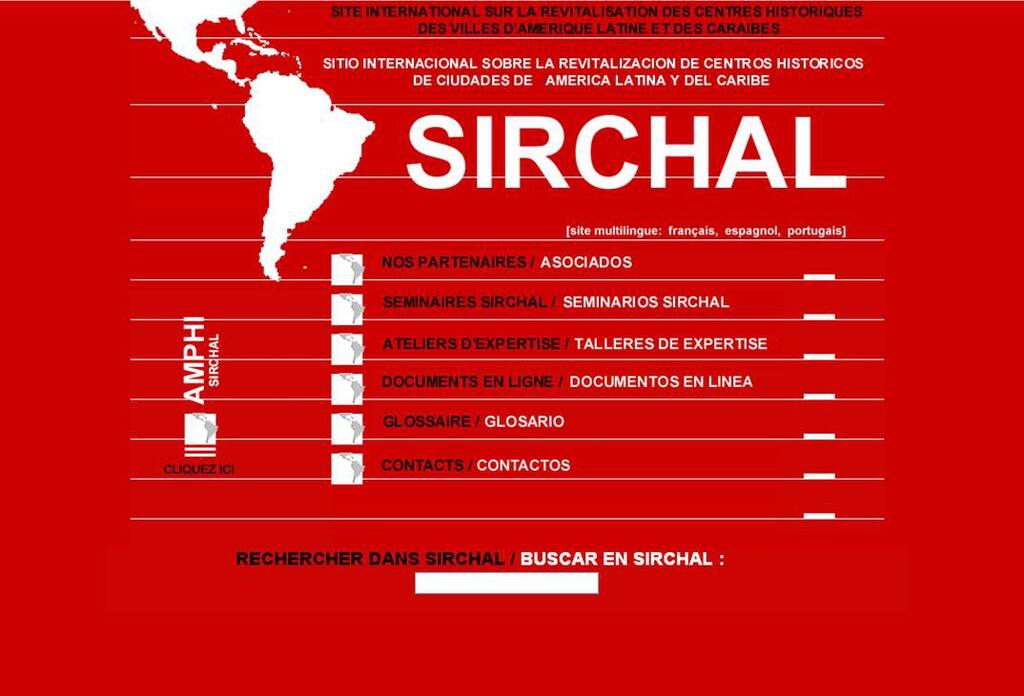 The SIRCHAL Programme (Network for the Revitalization of Latin American and Caribbean Historic Centres) has several goals including: the revitalisation of historic centres, the development of a cooperation dynamic based on building relationships between authorities of the Latin American and European projects, and the valorisation of French expertise. SIRCHAL also aims to create an international, professional, and technical network to respond to requests from technical and political authorities of Latin American and Caribbean cities regarding revitalisation issues linked to urban development.

The practical work of seminars and workshops is geared toward joint development of suitable proposals and alternative projects by pooling the experience of each member of the network.

It was established within the Direction de l'Architecture (directorate of architecture), of the French Ministry of Culture in partnership with the Inter-American Development Bank (IDB), UNESCO, and the International Union of Architects (UIA). The World Heritage Centre, in the framework of the France-UNESCO Cooperation Agreement, supported several plans developed by SIRCHAL. This programme was responsible for an agreement signed with the Inter-American Development Bank on the revitalisation of historic centres, and a second one with the International Union of Architects on the valorisation of architectural heritage from the 20th century. The SIRCHAL Programme is led by Leo Orellana.

Initially, the focus was the consolidation of a network of partners, members, and individuals sharing their experiences. Beginning in May of 2000, the programme changed from network-building to defining a workshop methodology. This new focus relied on an assessment system enabling local counterparts to define real problems – those they confronted on a daily basis – and the profiles of the international experts who participated in the workshops. An ongoing exchange stimulated by contacts and fact-finding missions makes it possible to assess, prepare, and define the themes covered in the workshops and seminars.

Three initial seminars took place: in Paris (France) in May 1998, Quito (Ecuador) in November of the same year, and in Santiago and Valparaiso (Chile) in May 1999. As a result, an international network for revitalisation of historic centres in Latin America and the Caribbean was established with the goal of promoting cultural and technical cooperation and furthering professional exchanges. The fourth international seminar-workshop was organised from May 29 to 2 June 2000 in Salvador de Bahia (Brazil). In 2002, six seminar-workshops held in the cities of Asunción (Paraguay), Santo-Domingo (Dominican Republic), Cartagena (Columbia), Pelotas (Brazil), Lima (Peru), and Valencia (Spain), enabled the implementation of the programme’s participatory methodology. In 2003, two SIRCHAL workshops took place in Paramaribo (Suriname) and in Ciudad Bolivar (Venezuela (Bolivarian Republic of)). The Ciudad Bolivar workshop provided an opportunity to reflect upon policy planning for the urban and fluvial environment, as the site had been inscribed on the Tentative List in 2003 as Cultural Landscape. In 2004, two workshops took place with government and municipal authorities, with the participation of French experts, in Costa Rica and Mexico. From 21 to 25 July, a first workshop was held in San José (Costa Rica), regarding the improvement of public heritage spaces in the three historic quarters of the Costa Rican capital. Then, from 14 to 19 November 2004, a workshop took place in Xochimilco (Mexico) concerning the development of a participatory plan for full rehabilitation of the cultural Heritage of Xochimilco.

In 2005, with continued support provided by the France-UNESCO Cooperation Agreement to the SIRCHAL Programme, Leo Orellana participated in a seminar in Havana (Cuba) on the management of historic centres.

In conjunction with the workshops, SIRCHAL revised and organized online publication of a specialised four-language glossary of terms related to the revitalisation of historic centres of Latin American and Caribbean cities. It is based on a dual approach: to reflect the heterogeneity of the processes of heritage and urban development professionals, and to demonstrate the cultural diversity of Europe, Latin America, and the Caribbean in this domain. The SIRCHAL glossary is available online.