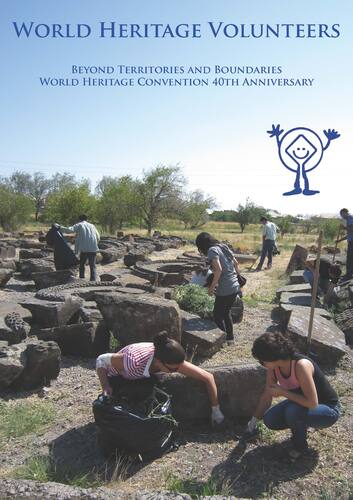 Beyond Territories and Boundaries

In celebration of the 40th anniversary of the World Heritage Convention, the World Heritage Volunteers (WHV) project aims more-than-ever at overcoming boundaries and territories, gathering youth volunteers all over the world around a single heritage. As the fragile future of World Heritage lies in the hand of youth, in the hand of those who, tomorrow, will be able to take care of it and “pass it on”, it is our duty to help them feel responsible for it, and be conscious of its outstanding value. This is what the Co-ordinating Committee for International Voluntary Service (CCIVS) and the World Heritage Centre, who jointly launched this project in 2008, are looking for.

This year, WHV workcamps will be held in 40 world heritage sites and 25 countries, on all continents. The project will involve 33 youth organisations and some 700 volunteers who will cross borders, share their cultures, and unite to preserve natural sites, restore archaeological finds, and raise awareness amongst local communities about their heritage. Volunteers will act in various world heritage sites, from the endangered antique Chan Chan archaeological zone in Peru, to natural sites such as the tremendous Victoria Falls in Zambia, or even the Great Wall of China. To achieve such an ambitious goal and fittingly celebrate the 40th anniversary, young coordinators from all organisations will be trained and supported by heritage and youth experts, while young WHV reporters will travel from site to site to cover the 2012 campaign.

Through this project, we hope to foster peace amongst cultures, for our youth to hold the future of World Heritage with a firm hand.

The WHV2012 benefits from the support of the European Youth in Action Programme and Panasonic, Japan.

2012 was another successful year of campaign for the World Heritage Volunteers (WHV), a jointly coordinated international volunteering project by the World Heritage Centre (WHC) and the Coordinating Committee for International Voluntary Service (CCIVS), under the framework of the World Heritage Education Programme. The 2012 WHV campaign, entitled “Beyond territories and boundaries” was composed of 50 youth work camps, held at 40 World Heritage sites in 25 countries, involving 35 youth organizations and about 800 young volunteers, as well as a planning meeting, and a leaders and media training.

The finale for the WHV 2012 campaign was the World Heritage Volunteers Conference held in San Cristobal de las Casas, Chiapas Mexico at the Hotel Diego de Mazariegos from 4-8 and 10 of December 2012. The Conference benefited from the support from the World Heritage Fund, Panasonic and the European Commission.

Among the highlights of the Conference were the report on the Closing Ceremony of the 40th Anniversary of the Convention (Kyoto, November 2012), in which the WHV 2012 was presented to a wide audience, and the announcement of the launch of the World Heritage Volunteers 2013.

Furthermore, during the Conference, the workcamps of the WHV 2012 campaign were self-evaluated and the workcamp organized by Arbeitskreis Wachau, a World Heritage management organization in Austria, at Wachau Cultural Landscape, was acknowledged as the Best Practice Model of the WHV 2012.

2013 is expected to be another great year for WHV. Following the Call for Project Proposal announcement made during the Conference, 98 project proposals from 67 organizations were received for participation in this year’s campaign. About two thirds of these projects will officially be part of the WHV 2013. The profile of each of project will be available online at the WHC website by the end of March 2013.

Arbeitskreis Wachau organized the workcamp, to preserve dry and half-dry grasslands within the site (in total 60 hectares), involving international volunteers mostly 16-30 years old, who were recruited by Austrian Youth Alpine Association and by Service Civil International in Austria.

Prior to the start of the WHV work camp, Arbeitskreis Wachau, with the site manager, local authorities and the UNESCO National Commission verified the circumstances of the site and acquired the necessary permits and authorizations to conduct the activities at the site. Also, camp leaders were trained, and detailed information was sent out to the volunteers beforehand.

Upon the arrival of the volunteers, the youth organization provided them with an orientation on the work to be done, safety instructions, a welcome WHV info-pack with a map, a participants’ list, and a T-shirt.

During the work camp, the volunteers actively participated in the different activities including determining internal work camp rules, planning activities for their free time, and organizing an ‘Open day’ with the media and the local community. The project activities included not only manual labor but also, workshops and sessions on the World Heritage, especially about the Wachau Cultural Landscape, and a press conference.

Besides the unique cultural context of Wachau Cultural Landscape, a cultural World Heritage site since 2000, the region is also an exceptional natural habitat, but highly endangered. Some of the sites are still cultivated with abandoned terraces (traditional dry stone walls), and most of the site consists of cliffs, so that it can be preserved only by manual labor.

The volunteers helped mainly to maintain the grasslands and terraces by cutting, mowing, raking and removing stones and invasive plants like the Black Locust (robinia pseudoacacia). They also helped to maintain paths of the Wachau World Heritage Trail, replacing invasive alien plants with native trees (populus nigra) in the flood plain forest along the Danube.

The work was physically very demanding and monotonous. Some of the sites were hard to reach, and volunteers had to carry tools and food. The volunteers worked with shovels, rakes, pickaxes, saws, petrol grass trimmers, loopers and tarpaulins for removing the grass, on average from 8.30AM to 4.30PM. They were supervised by three to five professional workers hosted by Arbeitskreis Wachau.

The project yielded great results. Each year, between nine and eleven hectares of dry grassland areas were able to be preserved. The estimated labor productivity ranged between 70,000 to 90,000 euros. Additionally, farmers who still cultivate valuable sites have been able to benefit from the volunteers’ work. As a token of gratitude, the volunteers were given certificates and thank-you cards at the end of the work camp by the youth organization.

To improve the quality and the outcome, an internal evaluation on the viability and sustainability of the project was carried out afterwards. Furthermore, Arbeitskreis Wachau asked for feedback from a wide range of stakeholders, including volunteers, the local community, and other partner organizations.

The project team and the volunteers have been supported by different local and regional institutions such as Jauerling-Wachau Nature Park, municipalities, hunting clubs and nature conservation organizations, who have provided tools and manpower. The WHV- Wachau Cultural Landscape also benefited from the support through the Rural Development Policy of the European Union.

Arbeitskreis Wachau is looking forward to hosting another fruitful work camp in 2013. In 2013 a new cooperation with the secondary modern school of Spitz has started, and the school will provide accommodation and cooking facilities for free, for the next upcoming years.