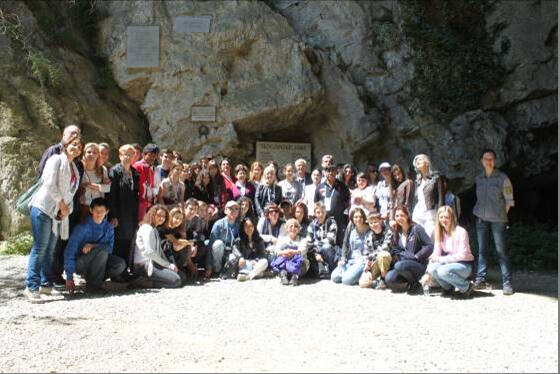 Networking for a better common future

The First South East Europe World Heritage Youth Forum, held 21-26 May 2011 in Porec, Croatia (from May 21 to 23), in Skocjan Cave and Lipika, Slovenia (from May 24 to 26), was opened on May 22, 2011 in Porec, Croatia by UNESCO Director-General Irina Bokova, with the Croatian Minister of Culture, Jasen Mesic and the State Secretary of the Ministry of Culture of Slovenia, Stojan Pelko. In her speech, Ms Bokova said: "I am convinced that youth heritage education is the way to prepare for the future. It is the best way to safeguard and to promote cultural diversity on the basis of respect and dialogue. It is one of the strongest ways to ensure that heritage unites and that cultures do not become exclusive." She ended by stressing the role of educators: "You are helping to transmit values and to translate these into practice."

Some parts of the South-East Europe region have been affected by conflicts and some heritage sites, both those inscribed on the World Heritage List and those of national significance, have been the targets of hostilities, often leading to their partial or total destruction. During this period, several World Heritage sites were included on the List of World Heritage in Danger, and then removed from it after successful restoration efforts.

After decades of conflict in the region, new sites were included on the World Heritage List, illustrating progress made with conservation and management, and witnessing to a general rise in the awareness of the importance of heritage. Time was then ripe to address the youth and the educators in the South-East Europe to make them aware of their specific role in World Heritage preservation, while using World Heritage as a common denominator and unifier. The role of education in this context is of primary importance.

In the short term:

In the medium and long term:

Heritage experts and UNESCO specialists gave inputs on the main themes of the Forum:

Workshops and concrete activities were held on World Heritage related issues. The students presented the projects related to cultural and natural heritage they were working on and developed creative communication on them. Activities including guided visits to the World Heritage sites of the Episcopal Complex of the Euphrasian Basilica in the Historic Centre of Porec, Croatia and of Skocjan Cave in Slovenia were also conducted.

The Forum's legacy: the recommendations of the participants

Considering that educators are faced with difficulties in promoting heritage (time limitations, restrictions, budget for extra activities, lack of staff and motivation for involvement), the teachers' working group on the World Heritage in Young Hand Kit recommended:

The five round-tables on the 5Cs provided the following recommendations: