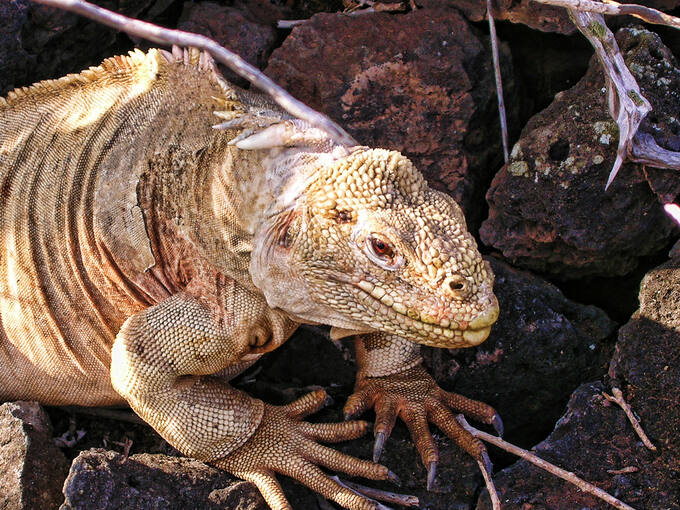 Situated in the Pacific Ocean some 1,000 km from the South American continent, these islands and the surrounding marine reserve have been called a unique 'living museum and showcase of evolution'. Located at the confluence of three ocean currents, the Galapagos are a 'melting pot' of marine species. The terrestrial area of the site is 766,514ha, comprising almost 97% of the land area of the archipelago. The marine reserve covers some 7,990,000ha.

In the Galapagos Islands World Heritage status contributes to raising national awareness of the islands' importance for conservation.

"In effect it reaffirms to Ecuadorians that the site represents something unique. World Heritage designation also acts to engender a sense of pride and responsibility among the population of Ecuador as they realise that they are the guardians of an irreplaceable heritage of humanity. The local community also has great pride and is willing to protect its heritage" - Scott Henderson, Conservation International.

Recently the local awareness was evidenced by very well-attended civic marches in favour of shark conservation. These were part of the activities undertaken in the locally declared ‘Year of the Shark’, which itself was a response to the rapid increase in the illegal ‘shark finning’, (removing fins from sharks), in the Galapagos Marine Reserve.

In terms of education about the site’s importance as a WH, and the responsibility it entails, another of the many people involved with the management of the Galapagos islands summarized the situation as follows;

"The visitors are aware and informed of World Heritage status via our unique guide system, which means that every visitor has close contact with a naturalist guide licensed by the Galapagos National Park Service (GNPS). Also, the GNPS visitor’s pack includes information about WH status and at the same time asks the co-operation from every one to preserve this unique treasure for future generations." - Felipe Cruz, Charles Darwin Research Station.

The political influence of World Heritage status is a tool that can be effectively used to change the attitudes or intentions of government authorities at all scales from taking unsound measures or inadequately implementing existing laws and regulations. Recently, attempts were made to modify tourism regulations in a way that would have undermined the participatory management system and reduced the authority of the Ministry of the Environment in Galapagos. A letter from the World Heritage Committee played an important role in stopping this potentially damaging alteration.

The Government of Ecuador (GoE) has also been encouraged, by the World Heritage Committee and others, to further protect the islands through enactment of the Special Law for Galapagos which includes:

It is virtually certain that without WH status Galapagos would still receive significant external contributions. As such the impact of WH in increasing funding for this exceptional site may be less than in other protected areas on the World Heritage List. Nevertheless, in the opinion of managers closely involved with the islands, WH status helps to focus attention on the site, which results in the appropriation of more funds. Without the verification of outstanding universal value provided by the WH designation there might be fewer funding proposals produced, and as a result less money available to work with. All managers consulted in this study indicated that they included WH status in their funding applications as it served as confirmation of the islands’ global significance.

However, the case for Galapagos is not as strong or clear-cut as for other less famous sites such as nearby Cocos Island. The fact that this site has WH status probably plays a more significant role in increasing funding opportunities than it does for a high profile site like Galapagos. The added value of World Heritage designation may therefore be relatively greater for less well known sites such as Cocos Island.

"World Heritage designation, in the case of most protected areas, increases the associated funding potential of the site. Although this is not an official eligibility criteria for Global Environmental Facility (GEF) funds, the designation does increase the chances of securing GEF resources " - Gonzalo Castro, Biodiversity Team Leader, The GEF Secretariat.

Linking Galapagos and Cocos islands a recent UNESCO-World Heritage/United Nations Foundation project aims to establish a ‘marine corridor’ between the two. For more information on this project follow the link below;

Through the World Heritage Centre opportunities have been provided for Galapagos managers to receive more training and also to pass on their own experiences of managing Galapagos. Asked whether increased networking and exchange between sites would improve management further, all consulted managers replied emphatically that it would. In the words of one:

"It will be a useful tool that will improve the management of other sites tremendously, as well as being a help to Galapagos managers. A network of managers to share problems and work together for solutions with the support of the World Heritage Centre would be the most effective mechanism to increase our capacity and that of managers of other sites." - Felipe Cruz, Charles Darwin Research Station.

In the Galapagos Islands tourism is a major consideration. Alongside the entrance fee, the Galapagos National Park also charges fees to the tour operators and other services and clients.

"While this fee is not related to the fact that the Galapagos Islands are a World Heritage site, it is clear that the status helps in justifying the fee to the visitors and users." – Felipe Cruz

For the Galapagos Islands the threats from its associated tourist industry are considerable. Two of the most significant are: firstly, the threat to local fauna caused by the year-round tourist presence, which leads to local population growth, increased invasive species and degradation of more land for urbanization and agriculture; and, secondly, the threat caused by the waste generated by the large number of visitors to the park.

In Galapagos particularly, the increased introduction of alien species destroys the local biodiversity and natural habitat. In light of this, the WH committee recommended that quarantine measures be introduced and that programmes be initiated to eliminate goats and other feral animals. The Government of Ecuador responded by introducing an inspection and quarantine system and by exterminating goats on a number of islands.

According to managers questioned on the subject, overall, since the site became a World Heritage it has benefited significantly, especially from the influence of WH in extending the site to include the Marine Reserve, and the Ecuadorian governmental passage of the Special Law for Galapagos.