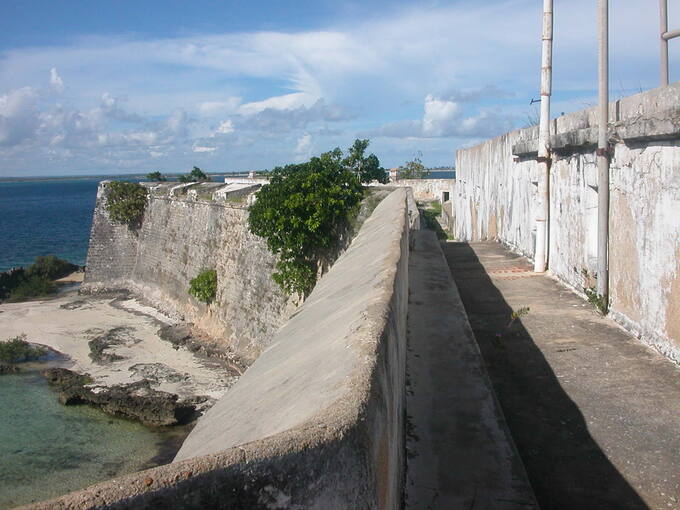 UNESCO and the Government of Mozambique signed an agreement in 2003 for the rehabilitation of the San Sebastian Fortress, the most emblematic monument on the Island of Mozambique, a site inscribed on the World Heritage List in 1991.

Built in the 16th century by the Portuguese colonial rulers, the Fortress is one of the oldest and in its massive and sober military architecture one of the most impressive monuments of the Island. It bears witness to the island's early function as a major Portuguese trading port on the sea route to India for spices and ivory, and later for slave trade as of the second half of the 18th century. Its defensive forms are greatly inspired by Italian Renaissance military architecture and have basically remained unchanged since, as evidenced by illustrations and drawings of the period. The original building materials are characteristic for the region and its natural resources and the intricate system of rainwater collection ably compensates for the island's scarcity of freshwater.

Since gaining independence in 1975, the economic stagnation of the Island of Mozambique became severe and the historical buildings, including the Fortress of San Sebastian, suffered serious decay in the following decades.

For this reason, immediate action was required to protect the building complex from further deterioration. The duration of the rehabilitation project was at first limited to two years concluding in December 2008 but could be extended thanks to additional funding granted from international donors. The project concentrates on a first remedial phase of restoration works to prevent the building from deteriorating further including partial repair and water proofing of the building complex. Recent additional funding now allows for the rehabilitation of the complete original water collection and storage system, and the installation of a water fountain outside the fortress for public water supply. Also, the complete restoration of a building block hosting the visitors centre can be realized within this first phase and serve as example for the restoration of the building in phase two. In the second phase  the fortress will be restored and equipped with a minimum of facilities for its new function in the future as an educational research facility for heritage conservation.

The maximum involvement of the local community in the project remains an underlying principle and binding guideline for the execution of the rehabilitation works. The conservational know-how acquired during the project may help accomplish further rehabilitation works on the island in the future and will be passed on to the community through on the job trainings and a promotional publication on the results also for a wider public.

Execution of the project involves a multidisciplinary team of professionals including conservators, architects, engineers, historians, archivists, artisans and others. A Mozambican architectural firm - Forjaz Arquitectos - was selected through an international tender as the architectural consultant of the project in charge of the technical preparation of the works and tender documents (execution drawings, technical specifications, bill of quantities, etc.), and of the supervision of these elements. The winner of the subsequent international tender for the restoration works is the Mozambican-Portuguese firm consortium Teixeira Duarte/ Bel who officially launched the works on 1 June 2008.

UNESCO is technically and administratively coordinating the rehabilitation project as part of its international mandate to ensure effective preservation and management of World Heritage sites. A UNESCO Chief Technical Advisor is present on the island for the daily coordination of operations of the project.

The project is funded by the Japanese Funds-in-Trust, the Union of Lusophone Capital Cities (UCCLA) and the IPAD (Portuguese Institute for Aid and Development), as well as by the Netherlands Funds-in-Trust and Flanders Funds-in-Trust.

Complementary funding will be necessary to round off the rehabilitation project to safeguard the Fortress' authenticity and to bring material and financial benefit to the local population.

Furthermore, the cyclone Jokwe on 7-8 March 2008 caused considerable damage to the Fortress' coral rock base and defensive walls and there is an urgent need for funding for repairs.