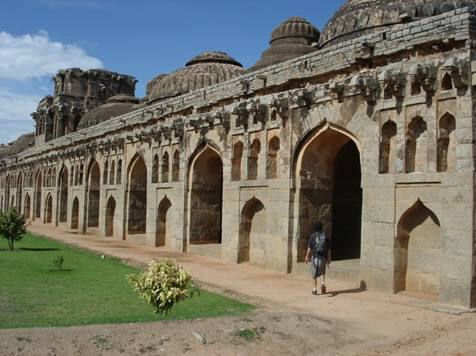 Situated in an exceptionally beautiful landscape and covering a vast area of 42 km2, Hampi, in India, contains major archaeological remains of what was once the capital of the last great Hindu kingdom and one of the world’s largest cities in the 16th century. Today, it is a living site, with 29 villages and widespread agricultural activity. Hampi is an important Hindu place of pilgrimage. With a growing number of visitors, it has the potential to become one of southern India’s major tourist attractions. The Group of Monuments at Hampi was inscribed on the World Heritage List in 1986. In 1999, the property was added to the World Heritage List in Danger after construction commenced on two suspension bridges that dominated the natural environment and threatened the site’s integrity with numerous trucks crossing the designated perimeter.

Following the recommendations of the joint World Heritage Centre/ICOMOS mission in February 2000, the Indian authorities made a considerable effort to restore the state of conservation of the property and ensure its conservation and management. Certain vital elements for implementing a management plan were lacking at the time, including cartographic tools to distinguish between zones in which building is permitted or prohibited, a cadastral map, and regulations to monitor and control the construction and restoration work on historic buildings.

It was thus required to develop a long-term technical assistance and partnership. At the request of the national authorities, and in close collaboration with the UNESCO New Delhi Office, the France-UNESCO Cooperation Agreement, with the support of the French Ministry of Culture, provided technical expertise and a French conservation architect (Architecte des bâtiments de France) who assisted Indian authorities regularly from 2003 to 2013. These combined efforts culminated in the removal of the property from the World Heritage List in Danger during the 30th session of the World Heritage Committee (Vilnius, 2006).

This technical assistance was provided whilst the Urban Master Plan was being designed so as to provide intermediary measures. This technical assistance led to a more conscious approach to regional planning which allowed for the formulation of the first elements of an urban development plan. The co-operation allowed for technical exchanges with Indian experts and paved in way for considering architectural and urban morphologies. Likewise, the existing focus on the monumental and archaeological aspects of heritage was enlarged to address concerns relevant to local habitat by means of a pilot study conducted in one of the villages. Landscape preservation was also explored. A technical unit attached to the local authorities was able to gradually assume administrative duties related to the oversight of urban planning permits and provision of architectural advisory services. A pilot study specifically oriented towards an architectural urban and landscape approach was conducted in one of the oldest village.

This cooperation led to fruitful and reciprocal exchanges thanks, in large part, to the close collaboration with the UNESCO New Delhi Office.

Managing regional strategic planning is a main issue for large sites in general. A holistic approach at all management and decision-making levels (national, regional and local) and at different scales is necessary in order to allow for compatible, adapted and controlled development of villages, tourism infrastructure and main infrastructures.

3. Notes the continuing efforts made by the Hampi World Heritage Area Management Authority (HWHAMA) to improve the management of the property;

4. Notes with concern that the requests by the World Heritage Committee at its 31st session (Christchurch, 2007) to implement the recommendations of the January 2007 mission have not yet been fully addressed;

5. Urges the State Party to:

a) modify the design and dimensions of the Anegundi Bridge and put in place traffic regulations for heavy vehicles;

b) approve and implement the integrated management plan (IMP) based on a revised Statement of Outstanding Universal Value including the conditions of integrity and authenticity;

c) clarify the boundaries of the property and its buffer zones;

d) ensure adequate human and financial resources to allow the implementation of the Integrated Management Plan;

6. Requests the State Party to submit to the World Heritage Centre, as soon as possible, the modified design of the bridge; the new traffic regulations for heavy vehicles; the final approved version of the IMP in three copies; the location of the interpretation centre; clarifications on the boundaries and buffer zones and the draft Statement of Outstanding Universal Value, including the conditions of integrity and authenticity, by 1 February 2009, for review by the World Heritage Centre and the Advisory Bodies and for examination by the World Heritage Committee at its 33rd Session;

7. Also urges the State Party to ensure that the implementation of the IMP by the HWHAMA is fully integrated into the State and National Planning framework, particularly for tourism and urban development;