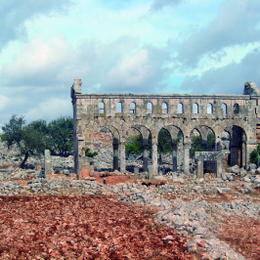 Preparatory assistance for the inscription of the Ancient Villages of Northern Syria, Syrian Arab Republic

The Ancient Villages of Northern Syria constitute one of the most extraordinary archeological ensembles in the world. There are more than 700 sites from the Roman and Byzantine eras located in a vast region. They are located on a series of limestone plateaus known as the Limestone Massif.

There is interest in these sites, not only because of their number, but also because they are in an exceptional state of preservation. The abandonment of these 8th century villages on the Limestone Massif, and the solidity of buildings made from that limestone have guaranteed their preservation. The “dead cities” or ancient villages are of exceptional interest because the nearly 2,000 km2 area provides a precise image of the state of rural life at the end of Antiquity, whereas, for this era, most conserved vestiges belong to cities.

However, rapid changes took place in the past years, as well as the growth of tourism which threatens the integrity of this landscape and its historic vestiges.

The Syrian authorities asked for UNESCO’s assistance to protect and inscribe this landscape on the World Heritage List. A number of studies were then conducted by the Directorate-General of Antiquities and Museums (DGAM). The results were presented in the form of an exhibit in Damascus, Syrian Arab Republic, and were the subject of international meetings beginning in 2001. Preparatory assistance was provided under the France-UNESCO Cooperation Agreement in 2005. The major difficulty in this case resided in understanding this territory in its entirety; recognizing not only its archeological value but also its landscape value. Since the concept of cultural landscape does not exist in Syrian law for antiquities no rules existed that allowed for consideration of a heritage ensemble on a territorial level. In this context, the project involved defining the boundaries of eight “parks” which, in their quality and variety, constitute a sampling of the richness of the Limestone Massif. Next, a plan for protection and management was created to ensure safeguarding of the property in accordance with the requirements of economic and tourist development in the country, this included the establishment of laws of protection specific to the eight parks, as well as consideration, at the regional level, of territorial development and its challenges. It also included reinforcing the capacities of the DGAM and supported the creation of a local management body, as well as establishing a management plan and an action plan for the property.

Technical assistance continued in 2010, in particular for the preparation of the “Action Plan” that completed the nomination proposal in January 2011. This nomination proposal was then delivered to the World Heritage Centre in January 2010. This supplementary document reported on the progress, in terms of management tools and coordination implemented at the national level since January 2010. It also showed the implementation of an ambitious management plan for the territory.