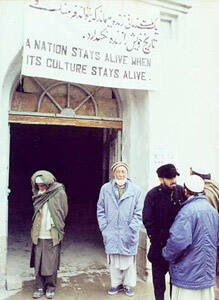 The focus of this Campaign is the safeguarding of all aspects of Afghan cultural heritage, both tangible and intangible, including museums, monuments, archaeological sites, music, art, traditional crafts etc.

The safeguarding of cultural heritage holds an important position in order to strengthen the sense of national identity. Cultural heritage can become a rallying point for former adversaries, enabling them to re-build ties and dialogue and re-design a common identity and future together.

UNESCO's strategy is to help re-establish the links between the populations concerned and their cultural history, helping them to develop a sense of common ownership of monuments that represent the cultural identity of different segments of society. It is therefore directly linked to the nation-building process within the framework of the UN and international concerted efforts for rehabilitating Afghanistan. With reference to UN Secretary-General's dictum "Our challenge is to help the Afghans help themselves," policies and activities for the safeguarding of Afghanistan's cultural heritage focus on training and capacity building activities, related to the preservation of this cultural heritage. In addition, following the Government of Afghanistan's request to UNESCO to coordinate all international efforts in the field of culture, the International Coordination Committee for the Safeguarding of Afghanistan's Cultural Heritage was created under the auspices of UNESCO. The Committee's advice enables the Afghan authorities to develop a cultural policy framework for immediate and long-term heritage protection.

Afghanistan, situated at an important junction on the ancient Silk Roads, has been the crossroads of cultures since time immemorial.

Its unique cultural heritage reflects a history that is marked by the complex indigenous encounters between Achemenid Persia, Alexandrian Greece, Buddhism, Hinduism and Islam.

However, due to prolonged armed conflict and fanaticism, much of this outstanding cultural heritage has been destroyed. The Bamiyan Buddhas were dynamited in March 2001, and in the following months most of the debris together with the remains of original sculpture, was taken away to be sold. In addition, the small statues in the collections of the Kabul Museum were smashed, including many stored for security reasons in the Ministry of Information and Culture.