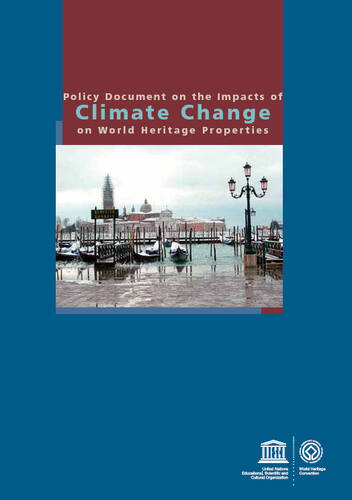 At its 30th session in July 2006, the World Heritage Committee endorsed the report on "Predicting and managing the impacts of Climate Change on World Heritage" and the "Strategy to assist States Parties to implement management responses", which were prepared following a meeting of experts in March 2006.

The World Heritage Centre is taking the following action on the different elements of the decision of the Committee:

One of the more substantive follow-up actions to be taken on the Committee's Decision 30 COM 7.1 is the preparation of a "Policy document" on the subject, in consultation with various stakeholders (see specifically paragraph 13 of the decision). For this purpose, a two day meeting of a small group of experts, practitioners and other relevant organisations and individuals is planned to be organized on 5 and 6 February 2007 in UNESCO Headquarters in Paris. The State Party of the Netherlands has kindly offered to support this meeting and associated process.

In preparation for the proposed meeting, a draft of the policy document, in consultation with relevant experts and organizations, is being developed. This draft will be discussed and finalised by the experts at the meeting; the new draft emanating from this meeting will again be sent out to a wider group for review, in keeping with the Committee's decision.

On the issue of synergies between conventions on this issue, UNEP's Issue-based Modules (IBM) Project is being researched to help prepare a section for the draft policy document. The Advisory Bodies will help in identifying future research needs in the area of climate change and World Heritage.

3. Also recalling the submission in 2005 of four petitions by civil society and non-governmental organizations on the impacts of Climate Change on World Heritage properties, complemented by an additional petition in February 2006,

5. Thanks the Government of the United Kingdom for having funded the meeting of experts, which took place on the 16th and 17th of March 2006 at UNESCO Headquarters in Paris, and also thanks the United Nations Foundation for its support, as well as all the experts who contributed to the meeting;

6. Endorses the "Strategy to assist States Parties to implement appropriate management responses" described in Document WHC-06/30.COM/7.1, and requests the Director of the World Heritage Centre to lead the implementation of the "Global level actions" described in the Strategy through extrabudgetary funding and also takes note of the report on "Predicting and managing the impacts of Climate Change on World Heritage";

7. Encourages UNESCO, including the World Heritage Centre, and the Advisory Bodies to disseminate widely this strategy, the report, and any other related publications through appropriate means to the World Heritage community and the broader public;

8. Requests States Parties and all partners concerned to implement this strategy to protect the Outstanding Universal Value, integrity and authenticity of World Heritage sites from the adverse effects of Climate Change, to the extent possible and within the available resources, recognizing that there are other international instruments for coordinating the response to this challenge;

9. Invites States Parties, the World Heritage Centre and the Advisory Bodies to build on existing Conventions and programmes listed in Annex 4 of Document WHC-06/30.COM/7.1, in accordance with their mandates and as appropriate, in their implementation of Climate Change related activities;

10. Also requests States Parties, the World Heritage Centre, and the Advisory Bodies to seek ways to integrate, to the extent possible and within the available resources, this strategy into all the relevant processes of the World Heritage Convention including: nominations, reactive monitoring, periodic reporting, international assistance, capacity building, other training programmes, as well as with the "Strategy for reducing risks from disasters at World Heritage properties" (WHC-06/30.COM/7.2);

11. Strongly encourages the World Heritage Centre and the Advisory Bodies in collaboration with States Parties and other relevant partners to develop proposals for the implementation of pilot projects at specific World Heritage properties especially in developing countries, with a balance between natural and cultural properties as well as appropriate regional proposals, with the objective of developing best practices for implementing this Strategy including preventive actions, corrective actions and sharing knowledge, and recommends to the international donor community to support the implementation of such pilot projects;

12. Further requests the States Parties and the World Heritage Centre to work with the Intergovernmental Panel on Climate Change (IPCC), with the objective of including a specific chapter on World Heritage in future IPCC assessment reports;

13. Requests the World Heritage Centre to prepare a policy document on the impacts of climate change on World Heritage properties involving consultations with relevant climate change experts and practitioners of heritage conservation and management, appropriate international organizations and civil society, to be discussed at the General Assembly of States Parties in 2007. A draft of the document should be presented to the 31st session in 2007 for comments.

This draft should include considerations on:

a) Synergies between conventions on this issue,

b) Identification of future research needs in this area,

c) Legal questions on the role of the World Heritage   Convention with regard to suitable responses to Climate Change,

d) Linkages to other UN and international bodies dealing with the issues of climate change,

e) Alternative mechanisms, other than the List of World Heritage in Danger, to address concerns of international implication, such as climatic change ;

14. Considers that the decisions to include properties on the List of World Heritage in Danger because of threats resulting from climate change are to be made by the World Heritage Committee, on a case-by-case basis, in consultation and cooperation with States Parties, taking into account the input from Advisory Bodies and NGOs, and consistent with the Operational Guidelines for the Implementation of the World Heritage Convention.