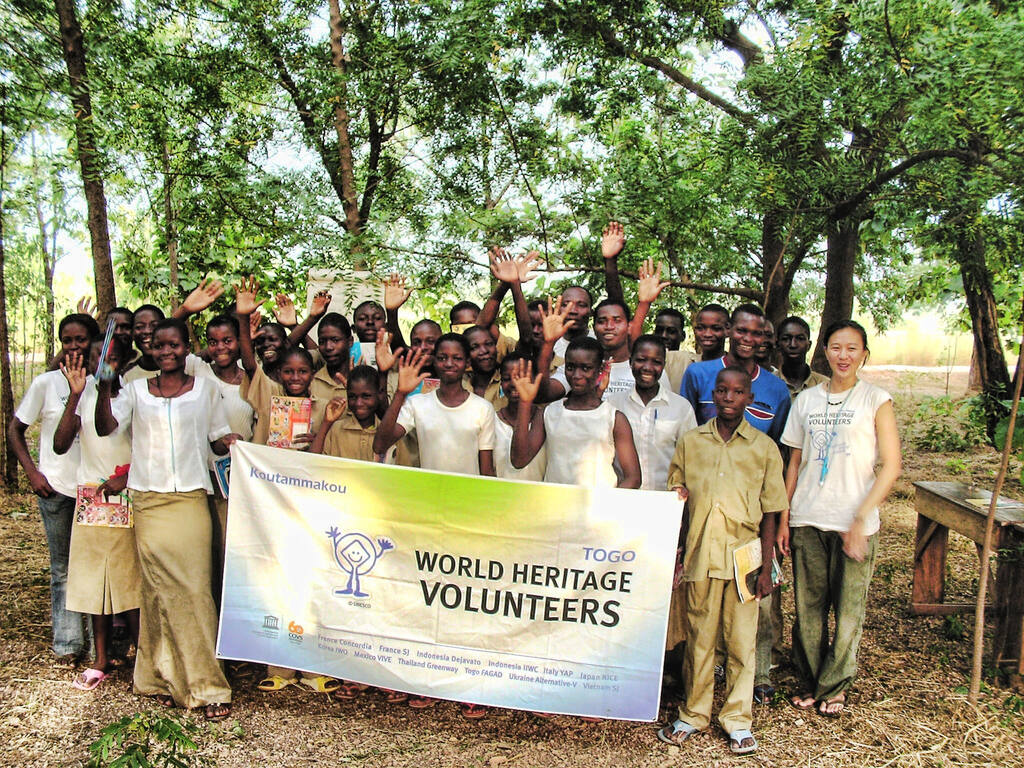 The project aims at raising awareness about the necessity to protect, preserve and promote cultural and natural heritage in general and the inscribed or potential World Heritage sites in particular.

The project furthermore aims at demonstrating the value of non-formal education as an approach to disseminate the values and expertise developed at the inter-governmental level to a large public and to young people in particular.
It aims at exploring opportunities for a dynamic dialogue between the heritage and education experts involved in the promotion and protection of the sites and the volunteers and youth groups developing concrete World Heritage projects.
Eleven projects - taking place in four continents between June and October - were selected for the 2009 campaign and will contribute to:

Togo, Koutammakou - the land of Batammariba: CCIVS member organisation Fagad will contribute again to the development of this site - after a very successful pilot action in 2008 - focusing on awareness raising and capacity building campaigns on the need and methods to preserve this dynamic cultural and spiritual landscape, inscribed in the WH list in 2004. July and 5-25 October 2009.

Zambia, Victoria Falls : CCIVS member organisation YAZ will work to raise awareness among the local communities and tourists about the value of this natural heritage and renovate foot paths around the Victoria Falls, one of the most spectacular waterfalls in the world, inscribed for both geological and ecological values in 1994.
1-14 July 2009.

Mexico, Churches in the Zoque Province, Chiapas : CCIVS member organisation Nataté will intervene on one of the eight XVI-century churches on the Zoque route, promoting its importance and universal values among the inhabitants of the region: the churches can still preserve their roles as spiritual guides for the local population, and represent a focal point of efforts to recover the use of the Zoque language and culture. The site was proposed for inscription in the WH list in 2001. 4-18 July 2009.

Peru, the Historic Centre of Cajamarca : CCIVS member organisation Brigada de Voluntarios Bolivarianos del Perù will run a research project to identify the main damages and deterioration and launch a media campaign to involve all stakeholders in the preservation and renovation of the Historic Centre of Cajamarca, proposed for inscription in the WH list in 2002. 6-26 June 2009.

Indonesia, Borobudur Temple Compounds : CCIVS member organisation IIWC will work for the second year on the compounds of the famous Buddhist temple, dating from the 8th and 9th centuries and restored with UNESCO's help in the 1970s. Senior students in tourism management will be involved in World Heritage education activities and act as ‘Young Guardians' to preserve and promote the site, inscribed in the WH List in 1991. 14-27 July 2009.

Indonesia, Prambanan Temple Compounds : CCIVS member organisation Dejavato is organising a second project around the largest temple compound dedicated to Shiva in Indonesia, inscribed in the WH List in 1991. As a follow-up of 2008 action, the program will focus on increasing the awareness of the local population - especially the young generations - to create a sense of ownership and respect for the site and preserve the common heritage by cooperating hand in hand with all the stakeholders involved. 8-22 August 2009.

Republic of Korea, Jeju Volcanic Island and Lava Tubes : CCIVS member IWO is committed to the promotion and conservation of Geomunoreum Lava Tubes, inscribed as a natural site in the WH list in 2008. The volunteers will support the organisation of the International Tracking Race on the heritage site and organise a seminar to share the importance of cultural and natural sites in their countries with the local population and the tourists. 27 July- 8 August 2009.

Vietnam, Ha Long Bay : CCIVS member organisation SJV will continue and improve its efforts to raise the awareness of the local population and authorities about the environmental problems affecting the natural site of Ha Long bay, inscribed in the WH List in 1994. Fuel and oil, garbage and the raising number of tourists have created serious pollution impacting both the aquatic and terrestrial ecosystem of the islands. A bicycle ride throughout the city and beach cleaning actions are among the activities that will be carried out by the volunteers to give visibility to the environmental efforts needed to preserve the site. 17-28 August 2009.

France, Fortifications de Vauban et Arsenal de Rochefort et fortifications de l'estuaire de la Charente - Ile d'Aix : CCIVS member organisation SJ is launching a second campaign for the restoration and improvement of the paths in and around the stronghold of Fort Liedot. The use of traditional renovation methods will be particularly promoted, and several activities with the local population will guaranteed the visibility of the action and the participation of the community in the protection of the cultural and historical heritage of the Island. Such heritage includes the Vauban fortifications (inscribed in the WH List in 2008) and the Arsenal de Rochefort et fortifications de l'estuaire de la Charente (proposed in 2002), fortified constructions built in the XVII century and representing the unique style of military engineering in this period. 8-29 June 2009.

Ukraine, L'viv - the Ensemble of the Historic Centre : CCIVS member organisation Alternative-V will work both on some basic renovation work - in one of L'viv's historical parks - and run a World Heritage exhibition and a specific workshop with children. Cultural Diversity will also play an important role in the promotion of this site, inscribed in the WH List in 1998 and whose value also resides in its history of different cultural and religious traditions. 3-16 August 2009.

Italy, Venice and its Lagoon (Certosa Island) : CCIVS member organisation Legambiente is involved since a few year in the restoration of both the cultural and natural heritage of one of the most interesting islands in Venice Lagoon, Certosa. The island, which hosts a unique convent from the XIII century and occupies strategic position for Venice conservation, between the lagoon ecosystem and the open sea: it was for a long time abandoned but is now growing as one of the main attractions in the Venice site, inscribed in the WH List in 1987. 18-31 August 2009.